Many pet owners today have discovered raw or cooked homemade diets as a healthy alternative for their pets. When feeding a homemade diet, the food is put together from fresh whole foods in a manner to mimic a natural diet consisting mainly of prey animals and then fed raw, cooked or partially cooked. This feeding method has several advantages over processed pet foods: exact control over the ingredients, whole, unaltered and bioavailable nutrients, and the comforting knowledge that your pet is getting species appropriate, healthy food.

Although there is a lot of information available about nutrient content, bioavailability and energy content of various food items, the aspect of food energetics is not widely known. While the energy content of foodstuffs gives us information about the chemical energy (kcal or kJ) that can be derived from food through chemical reactions in the body, food energetics explores the effect that the food has on the body after it is ingested.

The energy content of a food assigns a value to the amount of energy that an organism can derive by metabolizing that food. That specific energy value is expressed in kilocalories (kcal) and/or kilojoules (kJ). One kcal is the amount of energy that is needed to heat 1 gram of water 1 degree celsius. One food calorie is equal to 4.1868 kilojoules (1 kcal = 4.1868 kJ).

Typically, the amount of food energy is established using a bomb calorimeter, which is a value established outside of the body. The value is then corrected taking into consideration theoretical digestibility, bioavailability and loss through the production of waste products in the body.

The concept of food energetics is generally said to have originated in traditional Chinese medicine (TCM), although one finds this concept in other traditional healing concepts such as Ayurveda, Tibetan medicine and traditional European medicine. Food energetics explores how foods influence and affect the body and its functions after they are ingested and metabolized. This knowledge can then be used to positively influence the health and well-being of the person or animal being treated.

The energetics of foods is divided in three general categories: warm, cool and neutral. Within the categories warm and cool there are further divisions or degrees from very hot to very cold, warm-neutral or cool-neutral.

For example, when you eat watermelon on a hot day it feels refreshing and cool – watermelon is classified as a cold food. Citrus fruits are generally classified as cool, they usually grow in hot 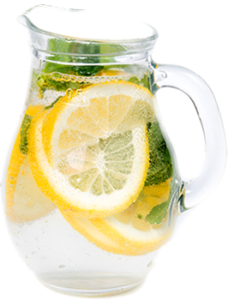 climates and have learned to deal with hot temperatures. They provide people and animals that also live in these hot climates with a healthy and cooling food.

If you drink a cinnamon-ginger-tea on a cold winter day, you will warm up quickly; cinnamon and ginger are considered hot foods. Eating a chili pepper will even make you start sweating as chili peppers are among the hottest foods.

Another factor that influences the energetics of food is the combination of different foods.

For example; turkey is considered a cold meat but serving it with ginger, fennel root or peppers can change the energetics of the combined meal to more neutral or warm.

The understanding and implementation of food energetics can be useful in preparing your pet’s food to improve their well-being and the success of any medical treatment.

Let’s say a dog is suffering from an illness with heat symptoms – restlessness, deep red tongue, allergies with itching etc – and you feed him a very warm meat like lamb. He will feel worse as the food will heat him up further. If you switch him to a cold meat like turkey, he will feel better simply because his food is cooling him off. Using food energetics this way can help warm your pet in the cold seasons and cool him in the hot seasons, letting him deal with extreme temperatures more effectively.

Using food this way gives new meaning to the famous quote by Hippocrates:
“Let food be thy medicine and medicine be thy food.”

The topic of energetics can be further differentiated according to taste and direction.

The Tastes of Food

The Sense of Taste

Among other things, the tongues of dogs and cats are used for gustatory perception. There are five different types of papillae covering the tongue. Some of these papillae contain taste buds. Dogs have comparatively few taste buds (1700) as opposed to humans (9000). Most of the dog’s taste buds are located at the tip of the tongue. Cats have even fewer taste buds than dogs (470) and cannot taste sweet. Cat tongues are also sensitive to the texture of foods, and will decline foods with a texture they do not know or like. Unlike humans, both dogs and cats have special taste buds for the taste of water. Whereas humans and many animals have a strong response to a salty taste, dogs and cats have a much weaker response to salty tastes, most likely because, as carnivores, they receive enough salt through their natural diets.

The sense of taste generally encompasses four tastes: sweet, sour, salty and bitter. Today the taste umami (savory) is recognized as a separate and fifth taste. The savory taste receptors respond to glutamate and aspartic acid. Research is being done to establish whether there are separate taste receptors for fats as well as the tastes of metallic, watery and alkaline. The taste “spicy“ or “hot“ is not actually a taste in the physiological sense, but rather a pain reaction of the nerves to the feeling of the hot temperature.

In TCM and other holistic medicinal systems, the “tastes” are of special importance. Each taste has a specific action, effect and direction in the body. The taste influences the body temperature, general vitality, the body fluids and mass. One needs all tastes in nutrition to keep the body in homeostasis. A diet with a very one sided taste is unbalanced over time and will cause illness. Understanding how tastes affect the organism can be useful to regain and maintain optimal health.

Here, the tastes are usually divided in sweet, salty, sour, acrid and bitter. In Ayurveda, the taste astringent is also described. The tastes in TCM are also matched to the elements as follows:
Sweet/Earth, Salty/Water, Sour/Wood, Acrid/Metal, Bitter/Fire.

Sweet
We all know that too many sweets will cause obesity! The sweet taste is nourishing and warm and helps build the fluids and mass. Sweet is moistening, so in reasonable quantities, sweet food will help maintain the mucosa and build blood. In excess sweet will cause a buildup of phlegm and thicken the blood. Waste accumulates in tissues and causes inflammation. Sweet foods in small amounts are useful to strengthen weak, underweight animals who are dry and lacking in body heat and strength. Animals that are hot and/or obese should have very limited amounts of sweet foods.
Carbohydrates, sweet tasting vegetables and fruits as well as honey and sugar are all considered sweet foods.

Salty
Water follows salt. Wherever salt is concentrated in the body, the tissues will attract water. For this reason, it is said that the salty taste softens, for example cysts. Because water is cooling and salt attracts water, salty is considered cooling and moistening. The direction of salty is downward, therefore salty foods can push digestion downwards and be considered laxative.
Salty foods and herbs are those with a high mineral content, especially sodium, i.e. kelp or nettles.

Sour
Sour tends to be astringent. In TCM sour is considered cooling but in Ayurveda warming. Chinese medicine considers astringent to be a part of the sour taste but Ayurveda has a separate taste for astringent. Many astringent foods and herbs are also sour, but many are not, so the Ayurveda view is probably somewhat more accurate. For example, lemons are sour and astringent, but oak bark is astringent without being sour.
Astringents hold the fluids in the tissues, so they can be cooling. On the other hand, astringents can stimulate the metabolism and could therefore be warming for some people and pets. Sour foods are used to detoxify and in combination with sweet foods to build-up the body fluids.

The acrid taste is warming, drying and burns fat. It stimulates digestion, aids in the cleansing of impurities in the body and burns fat, which warms the body.
Acrid distributes, in other words brings energy, warmth and nutrients to the peripheral tissues. Acrid helps remove mucus buildup as it drys, stimulates, and warms the metabolism and appetite. Many acrid foods and herbs have high levels of essential oils. Ginger is a good example of an acrid food. Garlic is one of the best remedies for detoxification, pneumonia and to reduce mucus or phlegm buildup. Caution must be exercised using acrid foods and herbs with cats because of their essential oil content, which can present problems for cats.

Bitter
The bitter taste is one of the most important for our animals. Bitter cools and dries, moves downwards or in the case of animals towards the rear and is very detoxifying. There are some warm bitters like Angelica, Calamus or Curcuma. Bitter stimulates saliva secretion, which in turn stimulates digestive juices, thus aiding in digestion and disinfection of raw foods in the stomach. Healthy stomach juices are an important defense of carnivores against bacteria and parasites in food. Many dogs today suffer from low stomach acidity which can be corrected through diet and the use of bitters. Bitters cool a “hot“ stomach that often goes along with stomach acid problems. Bitters also stimulate the liver and gallbladder, thus aiding in fat digestion and detoxification.
Bitters can work wonders when added to our pet’s diets. Many animals actively seek out bitter plants when they have digestive problems or parasites. Simply adding dandelion leaves, burdock roots or other nutritive bitter plants and foods to our pet’s diets will help keep them healthier.