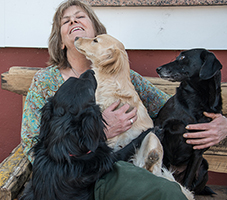 Animal herbalist and naturopath Swanie Simon was born in Germany but lived in the United States for thirty years after her family moved to N.Y. when she was one year old. She spent her youth in the suburbs of New York with frequent trips to Europe, followed by several years near Greensboro, N.C. to study. Later she lived in Florida and Texas and returned permanently to Europe in 1992, living in Germany and France.

Her love of animals an nature was apparent from a very young age and she has spent her life working with animals and learning everything she could about them. Influenced by Juliette de Bairacli Levy’s books, she went on to become a herbalist, TCVM practitioner and naturopath for animals (Tierheilpraktiker). Juliette de Bairacli Levy went on to become a dear friend and spent several years on Swanie’s farm in Germany.

Swanie is highly specialized in the natural rearing and treatment of dogs and cats and is one of Europe’s most renowned authors, teachers and herbalists. She is credited with making the subject of raw diets for dogs and cats popular in Europe and has written several best-selling books on the subject.

Today Swanie lives on a beautiful farm in the high forest region of Germany with 8 dogs, 5 cats, 3 horses, about 20 goats and a gang of chickens. She splits her time between her farm in Germany and her home in the beautful Provence region of south France.

Swanie has been teaching herbalism, TCVM and dog & cat nutrition since 2005 and online classes since 2014.
She is planning online classes in English starting in 2019.